In the previous post, I said that when you ask a waiter “Is [some dish] vegan?” you would not want to hear the answer “I don’t know”.

But what if you ask about a dish that they do not serve? Imagine asking “Are Powidltatschkerln vegan?” somewhere outside Austria. I would totally expect to hear “I don’t know” as an answer. (They are not, by the way).

So, we might need a boolean with a third “I don’t know” option, after all…

At the end of the previous part of this series, I turned on “strict” type checking. That setting removes null and undefined from the possible values for all types (and it does more).

The | here looks like the “logical or” operator of JavaScript—and you should also read it as “or”. So, vegan is a variable that is either a boolean or null and by defining the type alias NullableBoolean we get a type that is a boolean or the value null.

Here we get a new type Intersection that is both a NullableBoolean and a MaybeDefinedBoolean.

at the same time: Only the values true and false satisfy both restrictions.

When I first learned about union and intersection types (in another type system, a few years ago), I could not remember why “and” is and “intersection” while “or” is a “union”. The word “and” always sounded like it would add something, so when I thought of “and”, I also thought of “union”. Which is wrong, of course.

For me, it became easier to distinguish the names when I learned to think about the sets of possible values.

When a variable can hold either values from one type or values from another type, the set of possible values for this variable is the union of the other two sets.

Our NullableBoolean can hold values from boolean or from null, so the set of possible values is the union of boolean and null. 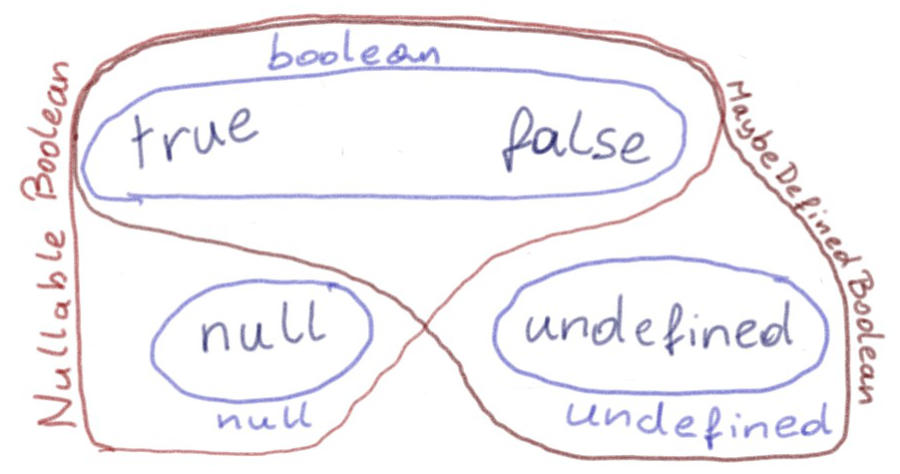 When, on the other hand, a value for a variable must satisfy all requirements from two or more types, the set of possible values for this variable must come from the intersection of the other sets.

Our type Intersection must both be a NullableBoolean and a MaybeDefinedBoolean at the same time, and the only two values in this intersection of the two sets are the “original” boolean values true and false. 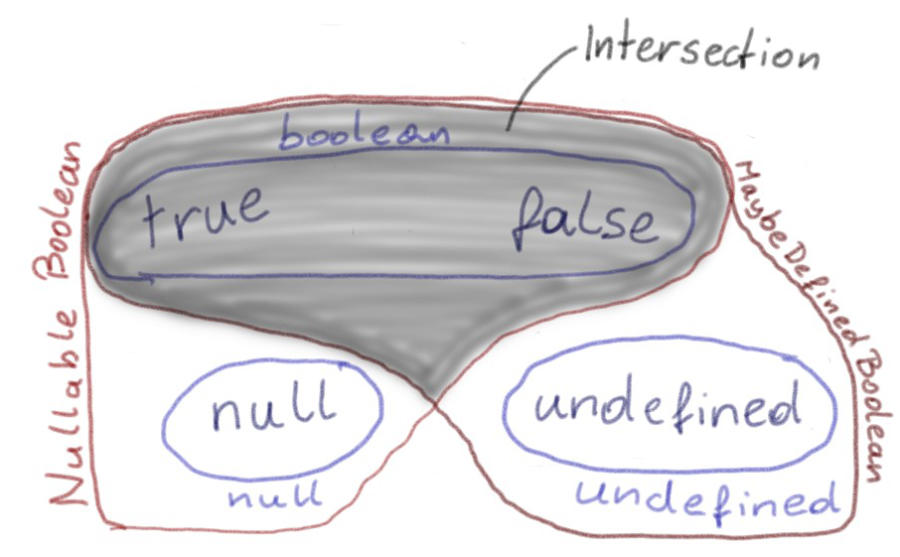 I will get back to unions and intersections again in later posts—because one can not only use them toadd null or undefined to a type in strict mode, but do more interesting stuff with them.